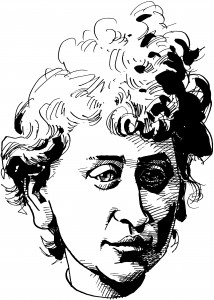 Hulda Garborg (born Bergersen; 1862-1934) was 11 years younger than Arne Garborg. They married in 1887 and she had her literary breakthrough in the 1890s. However, her work did not only revolve around writing. She was passionate about raising the status of Norway’s traditional culture and developing it further. Eventually she got the nick name “Mother Norway”. She wrote popular books about folk costumes, traditional dance, cooking and housekeeping, as well as novels, poetry and plays. Her literature was widely read in her time. Hulda Garborg was a prominent feminist and one of the country’s first female local politicians.